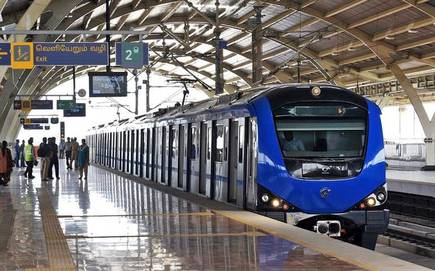 CHENNAI (Metro Rail News): The policy thinktank of the Central government NITI Aayog has finally given its nod for Chennai Metro Rail Limited (CMRL) to take loans from various international banks for its phase II project.

CMRL had received approval for the phase II project a few days ago. The Department of Economic Affairs (DEA) had also given its consent.

Chennai Metro’s phase II, which aims to cover 118.9 km at an estimated cost of ₹69,180 crore, will require loans from various agencies.

State government would pitch in with ₹13,723 crore initially, the rest, ₹55,457 crore, would be split between the State (20%), Centre (20%) and banks (60%). CMRL has taken a loan of ₹20,196 crore from the Japan International Co-operation Agency (JICA) for building 52 km of the project, the agreement for which has already been signed. For the remaining stretches, CMRL needs more loans and has sought funding from the Asian Development Bank (ADB), Asian Infrastructure Investment Bank (AIIB), New Development Bank (NDB) and the World Bank.

CMRL had to get the approval of NITI Aayog and DEA. It is mandatory that they give their acceptance. Sometime back, they raised queries on the enormity of the loan amount and whether the State government would be able to repay the same, along with the interest rate and various such issues.

This is not the first time that questions have been raised over the cost involved in phase II of the Chennai Metro. The Ministry of Urban Development had asked the CMRL on three occasions about ways to reduce cost.