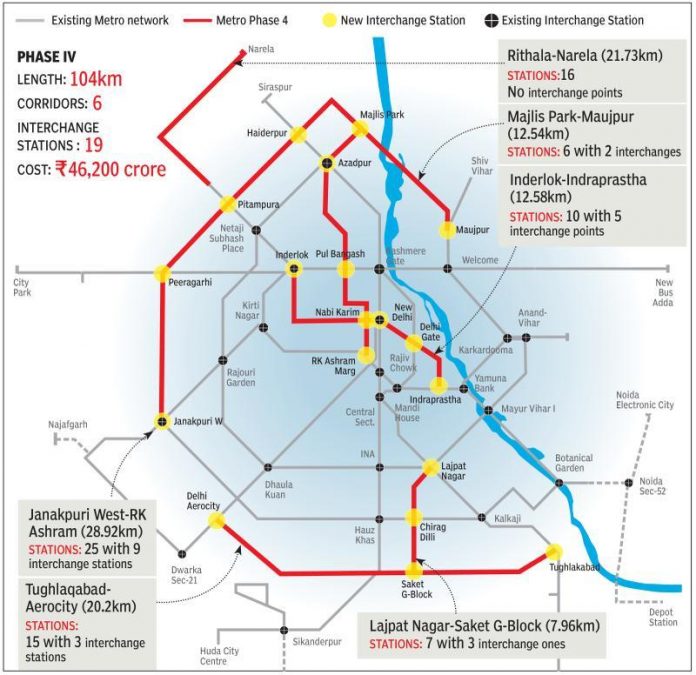 New Delhi, Metro Rail News:  The Delhi Metr Phase IV project of Delhi Metro Rail Corporation (DMRC) is likely to get the nod from Delhi government’s cabinet. The entire Phase IV project, which includes 6 new corridors, is all set to improve the connectivity across the national capital. Recently, it was reported that the DMRC was asked by Delhi government to seek fresh approval from its board before sending it to the cabinet for its final approval.

The estimated cost for the long-awaited project has been changed twice. First, the expenditure came down from Rs 55,208 crore to 45,603 crore. Again, the amount was revised to around Rs 46,800 crore. Last month, it was reported that the cost of the Phase IV project was slashed by Rs 10,000 crore by taking taxes as per GST into account. DMRC said that the total expenditure of the project was reworked, keeping in mind current prices and a new tax regime. According to Delhi Metro, another reason for the reduction in cost was its review of cost escalation of the project. Earlier, the project cost of Rs 55,208 crore had yearly escalation factor of 7.5 percent. However, following a review it was found that the escalation could be further reduced to 5 percent per year, DMRC stated.

With the establishment of Phase IV project, a total of 6 new corridors, spread over 103 km will be opened for the public. The project includes 7.96 km long Lajpat Nagar-Saket G-block section, 12.54 km long Mukundpur-Maujpur section, 12.58 km Inderlok-Indraprastha section, 20.20 km long Tughlakabad-Aerocity section, 21.73 km long Rithala-Narela section and 28.92 km long Janakpuri (west)-RK Ashram section. The work on Phase IV project, which is being said to be the most expensive project of Delhi Metro, is likely to be completed by the end of December 2024.