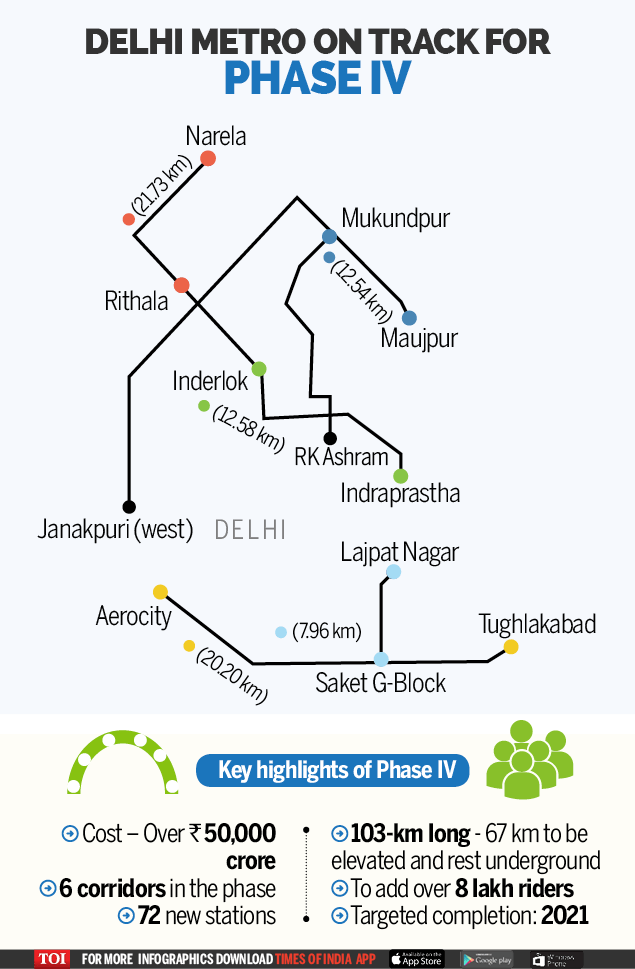 New Delhi: The projected year of Delhi metro phase 4 commissioning in 2025, This six proposed corridors of Delhi Metro’s Phase 4 are expected to carry over 10 lakh people per day, while the commuting fares will range between Rs 20 and Rs 100.

These projections, which form part of the financial viability segment of the Phase IV Detailed Project Report (DPR) prepared by the Delhi Metro Rail Corporation (DMRC), are being factored in by the Delhi government before approving the project at the next Cabinet meeting. The length of the six corridors will be 104 km.

The Metro’s estimates assume significance in light of the Delhi finance department’s observations that the proposed corridors would not qualify for a high capacity Metro even in the year 2031 and the bitter spat between the AAP and the DMRC over the 2017 fare hikes.

Also, DMRC had estimated that around 40 lakh commuters will use its network daily after the completion of Phase III. However, its ridership has slid down to 2015 levels and is hovering around 25 lakh per day after a double-phased fare hike in 2017.

The segment, titled ‘Financing Options, Fare Structure and Financial Viability’, pegs the daily average ridership at 15.50 lakh by the year 2031 and 22.32 lakh by 2041. It’s part of annexures of the draft Cabinet note of the project.

The Delhi council of ministers is expected to clear the Rs 45,603- crore project next week. The Delhi government’s share will be around Rs 10,465 crore. On Tuesday, the finance department held a meeting with the DMRC and the transport department at the Delhi Secretariat, in which some progress was made towards finalising the Cabinet note, an official said.