NEW DELHI, INDIA (Metro Rail News): On Sunday, Delhi metro announced that it has successfully started the free Wi-Fi facility for the commuters in all the existing metro stations of the yellow line in the Delhi metro. The yellow line currently has 37 metro stations (From HUDA City Centre to Samaypur Badli). This is considered a major step by the Delhi metro authorities in order to enhance the travel experience for the commuters.

For uninterrupted high-speed connectivity, the authorities have installed more than 330 access points in the metro station which cover areas of Outer Delhi, Central Delhi, North Delhi, South Delhi and Gurugram. The commuters could access applications like Google, Facebook, Gmail, Whatsapp by logging into the network ID “OUI DMRC FREE WI-Fi”. They can enter their respective phone numbers and get an OTP. After entering the OTP and accepting Terms and Conditions, they can enjoy seamless Wi-Fi service. This service can prove a boon for the students who travel through the metro regularly.

It is noteworthy that the service is already available at all stations of the Blue line as well as on the Airport Express line. With the introduction of free Wi-Fi service in the 37 yellow line metro stations, the count has gone up to 94 stations of the Delhi Metro Network. The tough times of the Covid-19 pandemic had affected the services of the Delhi metro badly. However, this is surely a spirit lifter for the commuters in the upcoming festive season. 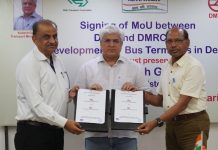