New Delhi: The Delhi Metro Rail Corporation (DMRC) completed the trials and testing of the 20.6 kilometre long Majlis Park- Durgabhai Deshmukh South Campus section of its Pink Line (Phase 3) on Monday. The route has also received most of the important and mandatory clearance required for the next step of inviting the Commissioner for Metro Rail Safety (CMRS) to inspect the section, including fire safety, license for working lifts, preliminary Independent Safety Assessment (ISA) reports for signalling and platform screen doors, from the department of telecommunications. 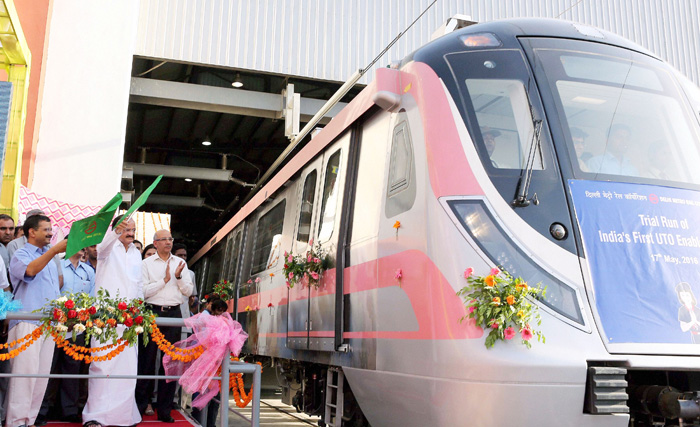 According to press release, “The papers for scrutiny and detailed examination by CMRS are under submission to his office and after these are cross checked, examined and scrutinised in depth by the office of CMRS, further action is expected. In addition, since the application involves voluminous data of civil, electrical, signalling and track, DMRC may also have to supply any additional information further sought by the office of CMRS. After this entire process, it is expected that a suitable date for inspection of the section will be indicated.”

The line 7 of the Pink corridor has 12 stations, including three interchange stations: Azadpur, Netaji Subhash Place and Rajouri Garden. The Metro will also cross Dhaula Kuan at a height of 23.6 metres (as high as a seven-storey building) to reach South Campus from Majlis Park.

Delhi Metro’s new UTO (Unattended Train Operations) enabled trains will operate on this corridor. The new trains, with extremely high levels of automation, will initially be run by train operators, that will gradually, move on to driverless operations (on the UTO mode).

Battling with land acquisition woes at Patparganj, Anand Vihar, Welcome, Jaffrabad and Maujpur since the inception of the project, the DMRC is now hoping to roll out services on its longest corridor by April 2018.