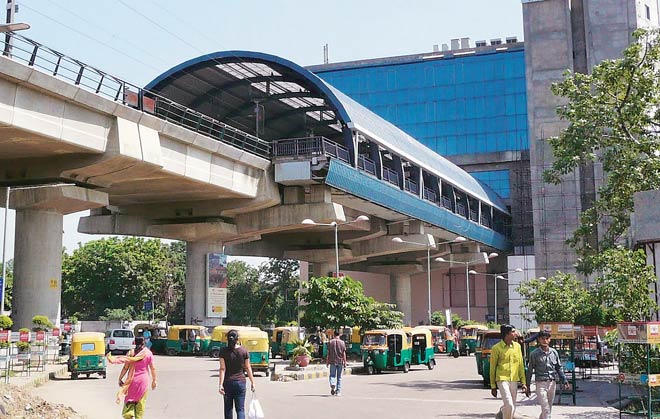 New Delhi: It is a good initiative by Delhi Metro Rail Corporation (DMRC) to make its new Magenta Line as a green corridor. DMRC has already floated a tender in this regard.

The first section of the Magenta Line between the Botanical Garden in Noida and Kalkaji Mandir in South Delhi was opened to the public on December 25, 2017. The rest of the corridor, between Kalkaji Mandir and Janakpuri West, is scheduled for March.

In addition to providing connectivity and state-of-the-art trains and signaling technology in the corridor, Delhi Metro Rail Corporation (DMRC) has also gone the extra mile to make it one of its greenest corridors. DMRC has planned extensive landscaping around many stations in the corridor, such as the Janakpuri West interchange station, where a large section would remain as an open green area with trees.

Going beyond its stations, DMRC is also remodeling parks near the corridor to turn them into vibrant public spaces.

To build the underground stations at Janakpuri West and the Dabri Mor station, the parks located at C-2 Block and Narang Colony were taken by DMRC. The corporation will now not only restore the park, but will beautify and equip it with facilities such as open gym, badminton courts, children’s play area, amphitheater, jogging tracks, lookouts, etc., before returning them to residents.

“After the park construction work is completed, gardening and horticulture will continue, including electrification and adequate lighting with high masts, construction of an efficient drainage system, lighting of paths and bollards along with the jogging track. , etc. “, said Dayal. “The bids for the work have already been submitted and the restoration of the parks will be completed in two months after the award of the contract,” he added.