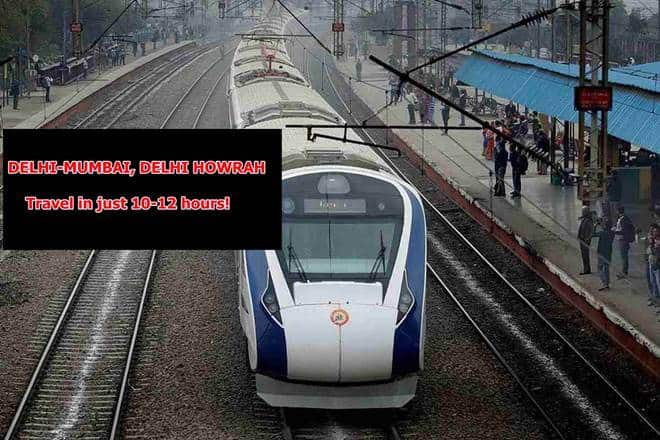 Delhi (Metro Rail News): Indian Railways will be going to reduce Delhi- Mumbai, Delhi-Howrah travel time by 5 hours. Indian Railways network have two of the busiest routes – Delhi-Howrah and Delhi- Mumbai.  These two routes are set for a massive infrastructure upgrade in the coming year, with the speed being raised to 160 kmph on the important routes. According to the PM Narendra Modi’s instructions, 100-day plan document of the Indian Railways, the train travel time on the above-mentioned routes will come down by 5 hours. The 100- day plan document of the Railway Board, seen by Metro Rail News, envisages an investment of around Rs. 14,000 crores for this massive project.

“Delhi-Mumbai and Delhi- Howrah routes account for nearly 30% of passenger traffic and 20% of freight traffic. While the upgradation of railway infrastructure on the New Delhi- Howrah (1,525km) will require an expenditure of Rs 6,684 crore, the New Delhi- Mumbai project (1,483km) will entail Rs 6,806 crore,” according to the national transporter.

The document articulate that the ambitious project will be undertaken in a fixed time, fixed cost EPC contract basis over a time span of 4 years from the date of approval. The national transporter is of the view that this format will help in reducing delays and cost overrun while also ensuring better coordination and economics of scale.

Train 19 is being planned for the Delhi-Mumbai route with the hope of bringing travel time down.  Indian Railways has been upgrading its rolling stock and one of the biggest technological leaps for it was the introduction of the self – propelled Vande Bharat Express on the Delhi- Varanasi route. Banking on the success of the Train 18 project, Indian Railways is now looking to manufacture Train 19, which will be Rajdhani Express – style sleeper variant of the Vande Bharat Express.

The identification of the Delhi-Mumbai, Delhi-Howrah routes for the 160 kmph upgrade is an important step in that direction as it brings its rolling stock up to world- standards, railway experts have time and again stressed on the need to invest in rail infrastructure such as tracks, signalling and fencing so that the average speed of the trains on the Golden Quadrilateral can be increased.

The Navi Mumbai metro to be operational by Dec 2021: CIDCO