DELHI, INDIA (Metro Rail News): The Delhi Metro Rail Corporation said that two Delhi Metro stations near the Tikri border with Haryana, one of the sites of the ongoing farmers’ protests, were closed on Friday due to security reasons. The two stations in Haryana Pandit Shree Ram Sharma and Bahadurgarh City fall on the Green Line of the network.
buy Accutane generic buynoprescriptionrxonline.net over the counter

“Security Update Entry/exit for Pandit Shree Ram Sharma and Bahadurgarh City have been closed”. Farmers from various states have been protesting at Singhu and Tikri on the Delhi-Haryana border and Ghazipur along the Delhi-UP border, where they have camped since 25th November 2021 seeking repeal of the three new agricultural laws”, said DMRC on Twitter.

Members of Shiromani Akali Dal have gathered at Gurudwara Rakab Ganj on Friday morning in view of a protest march organized by them against the farm laws”, said Police Officials. 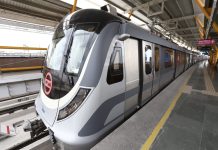