BANGLORE, INDIA (Metro Rail News): The opening up of the Mysuru Road-Kengeri line plays a vital role in making the daily travelling of office goers between Mysuru and neighbouring towns and Bengaluru faster and more comfortable. First, however, it is indispensable to put infrastructure for easy pedestrian access between the new Metro stations and the railway stations in their vicinity.

While the BMRCL stresses that regular commuters between Bengaluru and Mysuru enormously as the road traffic on Mysuru Road can be bypassed using the metro, those expected to use them think infrastructure for it is sorely missing.

“The Jnanabharati Metro and railway stations are connected, but only a few trains stop at this station. The two Metro stations of Kengeri Bus Terminal and Kengeri and Nayandahalli are not associated with their respective railway stations, which are nearly 800 metres from each other. The road to being crossed to access them is narrow, unhygienic, and dangerous,” said S. Yogendra, Rail Activist.

An option that can be considered by Railways is upgrading the Jananabharati railway station to help commuters interchange easily here, he added.

Thirty pairs of trains ply between KSR and Mysuru daily. “Of the 25 pairs stop at Kengeri while two pairs of MEMU trains stop at Jananabharati railway station,” said officials.

The Kengeri Bus Terminal Metro station is just 100 metres away from its Bangalore Metropolitan Transport Corporation (BMTC) Kengeri TTMC bus stand, one Karnataka State Transport Corporation (KSRTC) bay. Still, there is no connecting bridge as of now. However, Shri Anjum Parwez, BMRCL Managing Director, said, “We are ready with the designs and will be putting up a Foot Over Bridge at the earliest as soon as the line becomes operational. Multi-modal integration is a priority for the metro.”

“We will be keenly watching the travel pattern as soon as the line starts. If more buses are running in the direction towards Mysuru is required, we will introduce them soon. Buses from Mysuru Road Satellite Bus Terminal towards Kengeri run with 70% occupancy, and there is space to take on more commuters. We can even consider starting and terminating buses from Kengeri,” said Shri B.T. Prabhakar Reddy, Chief Traffic Manager (Operations), KSRTC. 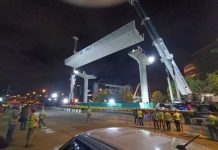 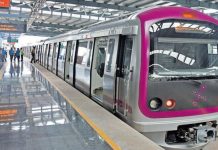