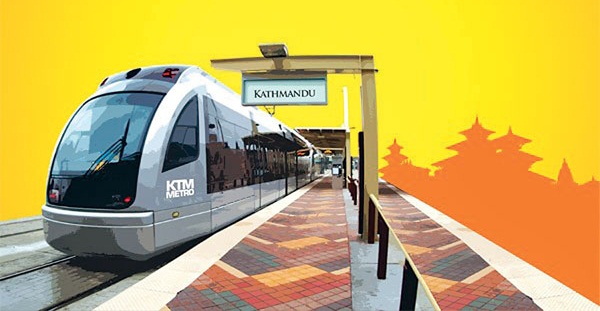 Kathmandu, Nepal: ‘Kathmandu is choking and the government is joking!’ A popular slogan going viral on social media, it is a fair description of the state of the Capital at present. Latest studies show that pollutants in Kathmandu’s air are five times more than the World Health Organisation’s guidelines. The latest pollution index by city ranked Kathmandu sixth globally. These data reflect the present situation; the Valley is rapidly becoming a bowl of dust and smoke. The unprecedented increase in the number of two- and four-wheelers, narrow roads, poor engineering practice during road widening schemes or road works are some of the main factors turning Kathmandu into ‘Dustmandu’. Time is running out to tackle the problems of traffic congestion and air pollution. The capital will grind to a standstill in the next few years if immediate action is not taken. An ultimate solution to these problems is the introduction of a mass rapid transit line through an electrified metro rail system in the Valley.

Recently, the Kathmandu Metropolitan City (KMC) signed a Memorandum of Understanding on conducting a technical and financial feasibility study for an elevated monorail system in the city. This indicates that the KMC is gradually realising the need for a new mode of transport. However, it is doubtful if it has fully comprehended the nature and size of the transport problem the city is facing.

A monorail system has a slim and light body structure, and so the authority could argue that it would be more feasible for Kathmandu’s narrow roads. However, it is necessary to understand that the capacity of a monorail system is very limited, catering to only 3,000 to 4,000 passengers per direction per hour. For Kathmandu, a densely populated and rapidly growing city, a metro rail system should be provided instead.

The proposed monorail system is a short-sighted vision, as the limited capacity would not solve the major transportation problem the city is facing. A monorail system could be appropriate for subsidiary lines serving short distance feeder travel with low passenger volume. Such a system would be more appropriate for developing urban areas outside the core urban zone.

Kathmandu is in need of a mass rapid transit system covering a wide part of the city, which can operate efficiently at a much greater capacity. A metro rail with a transport capacity of 20,000 to 50,000 passengers per direction per hour is required to meet present and future traffic needs. This applies particularly to the major transport arteries that will be built through and around the central areas of the Valley. The area within the Ring Road is the central zone of activity with major businesses and government administrative centres; it is also home to approximately 2 million people. For such a congested and densely populated region, a monorail system would not be adequate. To deal with Kathmandu’s current and future transport chaos, immediate development of a metro system is essential.

These three lines will serve as the Valley’s major transport arteries. Details will only be ascertained after a proper study; however, a capacity ranging from 20,000 to 50,000 passengers per direction per hour would not be an unrealistic estimate. International standard track gauges or equivalents should be adopted; if the civil structures are built robustly, the capacity could be enhanced by simply increasing the number of coaches.

Lessons can be learned from metro development in other Asian cities such as Bangkok and Delhi. Bangkok has operated the BTS sky train system since 1999; it has a capacity of up to 25,000 passengers per hour per direction, and daily ridership is about 600,000. Likewise, Delhi’s metro, operational since 2002, has a capacity of about 50,000 passengers per hour per direction.

A monorail system could be built with limited investment. A cheaper solution is clearly very attractive. Some claim that a monorail system could cost at least 80 percent less than a metro rail system. However, the city should not build infrastructure that will be outdated in a few years. Lack of timely and proper investment could potentially have huge consequences.

A metro rail system is essential for the regeneration of our city. Once built, such transport infrastructure will become a societal asset for generations. Such assets should be sufficiently resilient and their planning should be relevant for at least the next 20 years. A cheaper solution such as monorail is attractive and may work in the short-term, but our city needs a sustainable transportation system. The benefits of an effective rail transportation infrastructure is clear—it will boost economic growth, create jobs, regenerate communities, connect people and places, enhance the quality of life and foster environmental sustainability.

Building Kathmandu’s first metro railway will present many engineering challenges. Some 60km of tunnels and 45km of viaducts will be required for the proposed three principal train lines. The capital city will only be able to carry out this bold mission with proper vision, policy, planning, strategy and investment.

All residents and businesses of the Kathmandu Valley should oppose narrow visions, unsustainable policies and inappropriate planning, and support the implementation of robust city infrastructure such as the metro rail. The introduction of a metro system is vital for environmental sustainability, economic prosperity and an improved quality of life in Kathmandu.

(This article was written by Mr. Amatya and first published in Kathmandupost. Amatya is a chartered civil engineer and ground-engineering specialist currently practising in the UK.)