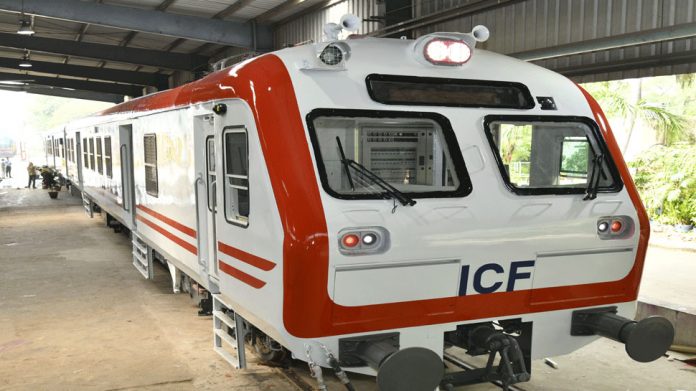 Thiruvananthapuram (Metro Rail news):  The passenger trains will be replaced by two 12-car rakes running in the Thiruvananthapuram railway division. The three-phase EMU is now in the EMU car shed at Avadi, Chennai, awaiting safety clearance and is to reach the State in July 2019.

Kerela will now have two three-phase EMU (Electric Multiple Unit) 12-car rakes, a ‘little sister’ of Train-18, with higher acceleration and deceleration and a host of passenger-friendly features, to replace the passenger trains

The coaches are fabricated with a stainless steel body and have higher hauling capacity, and are manufactured by Integral Coach Factory (IFC), Chennai. GPS- based passenger information system for announcement of the approaching stations and display.

It also has corrosion resistance, stainless steel pipelines for more reliability and minimal maintenance, public address system, and emergency stop button in the cabin for an immediate halt in emergencies, all these qualities make rakes unique.

The rakes will have ergonomically-designed seats, a modular roof-mounted ventilation system in addition to the regular fans to pump in fresh air, there are CCTV cameras in all the compartments for women, LED lights, and LED indication when a chain is pulled in case of emergency and have driver cabins on both the ends of the rake.

A single motorman will only be needed for train operations. The increase in maximum speed is 105 km per hour.

“We will gain two to three minutes at every stop owing to the fast acceleration,” said Divisional Railway Manager Shirish Kumar Sinha and he also said “Short-distance commuters, especially office-goers and students, can look for a cozy ride in the three-phase EMU car rakes and it will further improve punctuality. We have yet to take a call on the two passenger trains to be replaced,”