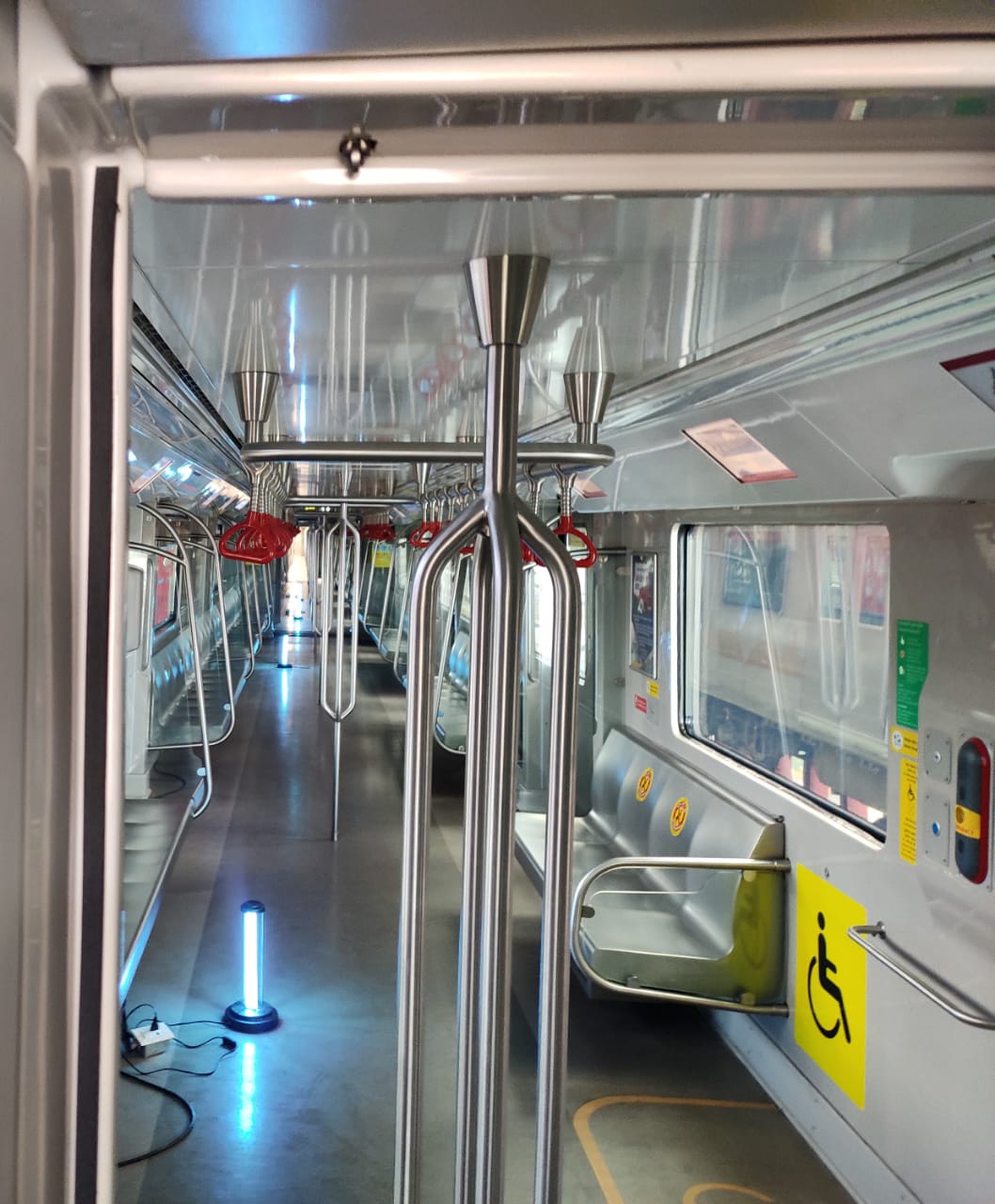 LUCKNOW (Metro Rail News): Lucknow Metro has earned another record to its name by becoming the first Metro in India to have started Sanitisation of metro train coaches with Ultra Violet rays. Taking inspiration from New York Metro’s experiment to sanitise trains with UV lamp rays, Lucknow Metro has become the pioneer of Metro Train Sanitisation in India through UV technology.

After becoming the first Metro in India to have started token sanitisation by Ultra Violet rays through the in-house developed UV box, Lucknow Metro has added another feather to its hat with entire train sanitisation through UV Radiation. Giving boost to the Make in India mission, Lucknow Metro in consultation with an Indian firm that deals in tube lights used in the sanitation apparatus, has developed a UV Sanitisation apparatus which works on Ultraviolet Germicidal Irradiation (UVGI) disinfection method.

It uses short wavelength ultraviolet (Ultraviolet C or UV-C) light of 254 nm UV-C to kill or inactive micro-organisms by destroying nucleic acids and disrupting their DNA. The apparatus which has been certified by DRDO in October, 2020, sanitises the entire coach in 7 minutes and as added care, we are sanitising each coach for 15 minutes.

The apparatus is operated through a remote and has a Switch on/off button, the radiations start after a minute of pressing the On button.It is imperative to state that this is the same apparatus that is being used by Medical industry to sanitise Operation Theatres and medical equipments. The best part of this initiative is that it is very economical, i.e. approximately a Cost reduction to 1/40th (2.5%) of the cost of sanitization through manual mode for 16 trains.

• Lucknow Metro already has another record to its credit by becoming the first in India to sanitize tokens by UV Rays. This initiative to provide the safest travel experience to our passengers was not just lauded by the passengers, but also earned accolades from the Government and other metros have also been directed to follow suit.

• Entire train sanitization in 30 minutes. Time to reduce in future with the procurement of more number of apparatus.

• UV Sanitization of entire trains costing 1/40th of the cost involved in sprinkling of manual sanitizers.

UPMRC MD, Shri Kumar Keshav says, “Passenger safety and comfort has always been our topmost priority and whatever we do is in sync with our objective to provide the safest and the most convenient mode of public transport to the people. When we started token sanitation by UV Radiation, we received overwhelming response and appreciation from our passengers. Now, with Train sanitation by Ultraviolet radiation, we want to assure all our passengers that their Lucknow Metro was, is and will always be the safest mode of transport. We are seeing significant increase in ridership everyday and it is this confidence of our commuters that pushes us to put in more and more efforts to make their travel enjoyable and hassle-free.”

MOU between IWAI and KMRL for Kochi Metro Terminal