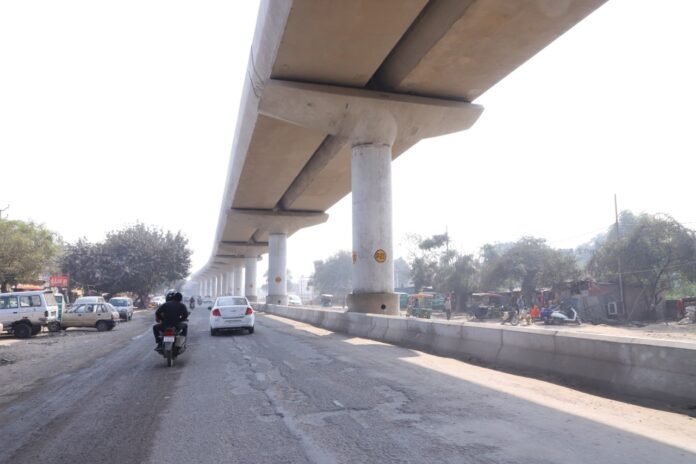 KANPUR (Metro Rail News): The Kanpur Metro Rail Project is an ambitious project of the GoI and GoUP and with the goal of providing Metro services to Kanpurites within the stipulated time frame; Uttar Pradesh Metro Rail Corporation Ltd. (UPMRC) is executing the project with full devotion. The skilled team of civil engineers of UP Metro has completed 400 Piers out of 513 under the Priority Corridor (IIT to Motijheel) in such a short time frame.

The team of UP Metro has completed the construction of 400 Piers that cover a stretch of almost 7 KMs, under 9 KMs long Priority Corridor. Besides this, the Metro engineers have also completed the erection of all the double T-Girders up to Gurudev Metro Station, starting from the IIT Metro station. The base for concourse level (first floor of an elevated Metro station) of all the 5 Metro stations (including IIT, Kalyanpur, SPM, Vishvavidyalaya & Gurudev) under this stretch has now been completed. A total of 434 double T-girders are to be erected under the Priority stretch for 9 Metro stations, out of which 332 double T-girders have already been erected.
Appreciating the Metro engineers’ dedication and zeal, Shri Kumar Keshav, Managing Director of UP Metro said, “The pace of construction works of Kanpur Metro has been excellent since the beginning and as a result, the team of UP Metro’s engineers and the civil contractor M/s AFCONS has been successful in approaching the set targets ahead of deadlines. Even after this, we are constantly striving to increase our limits and working capacity, as we have a ‘Herculean task’ of executing the trial run on the Priority Corridor by the end of November, 2021. We are quite confident that we will be able to achieve this goal, as we have promised.”