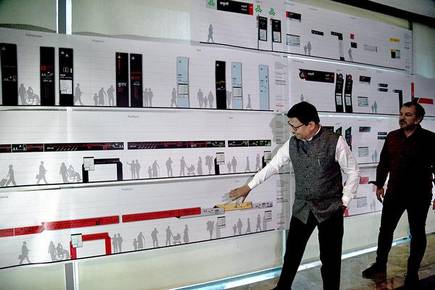 MUMBAI (Metro Rail News): The MMRDA released a document on Friday to set design guidelines and assign official line colours to the Mumbai metro line 7 and 2A in their extensions which are in a different stage of execution.

The Metropolitan Commissioner of MMRDA, R.A. Rajeev stated that having colours is necessary as this makes it language agnostic and hence more convenient to people. “We have chosen to have a black background across the stations for signages.
buy clomid online rxbuywithoutprescriptiononline.net/clomid.html no prescription
We have picked black as it is the colour of fashion and Bollywood, and Mumbai is the fashion capital.”

Systra created the signage designs and is based on the designs incorporated at 4 stations which are Metro de Paris, French National Railway Station SCNF, Metro De Marseille, and Algier Metro.

The signage has incorporated various colours for entry and exits and will have many colours at stations where 2 or more lines converge. “The work on putting up news signs will start at Bandongri station on Metro Line 7 in 2-3 weeks,” said Mr Rajeev.

The Mumbai Metropolitan Region Development Authority also unveiled the design of the common mobility card that will be available for Monorail and Metro at first. Mr Rajeev stated that work on creating the framework for the card was underway and will be available by the time the Metro corridors were commissioned.