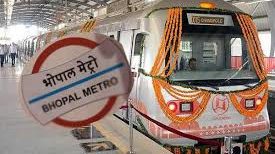 A businessman at Jehangirabad said that Our shop is about 20sqft. Surveyors who undertook the measurement of the land have identified that about 20 to 25sqft land would be demarcated for the metro rail. It is a very typical situation. The area is just metres away from the metro depot site at Arera Hills.

When contacted, the district administration declined to comment on the matter. A local area officer said that he was not aware of the situation and MPMRCL has not intimated the administration.

The officer further added that a large number of business and residential property owners could be adversely impacted. A repeat of the situation when the BRTS corridor was being constructed should be avoided by the government.

Experts said that the 2009 cost figure for the construction of elevated metro (standard gauge) is Rs135 crore per kilometre and underground construction cost was pegged at Rs400 crore (the cost will be less when the depth is within 10 metres and the subsoil is hard).

Given the delay of almost 10 years since the metro was first proposed, the project cost is definitely expected to escalate further.