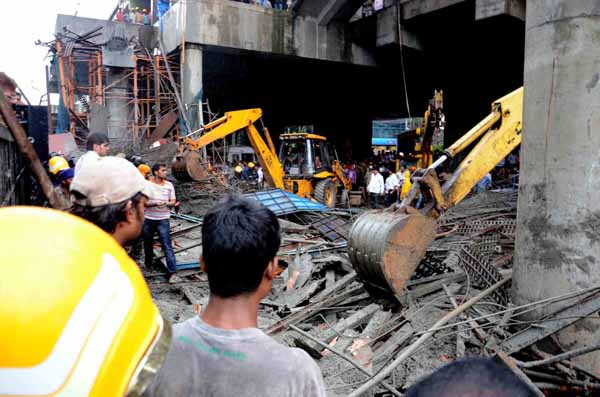 Mumbai: One worker was injured when a pillar collapsed during the on-going construction work of Mumbai Metro-7 between Goregaon and Aarey on Western Express highway in north Mumbai on Saturday.

Fortunately, the pillar did not fall on any vehicle plying on the Western Express highway.  Had it not been for the fact that Saturday was a holiday because of ‘Bhau Bheej’, there would have been casualties in the mishap. Reports said that a BEST bus had passed minutes before the collapsed onto the neighbouring Western Express highway.

The mishap took place soon after a prop erected to support the pillar was removed.

Following the mishap, the traffic was disrupted for sometime on the Western Express highway.

The  Mumbai Metro-seven line will provide inter-connectivity among the existing Western Express Highway, Western Railway, Metro Line 1 (Ghatkopar to Versova), the ongoing Metro Line 2A (Dahisar to D N Nagar) and the proposed Metro Line 6 (Swami Samarth Nagar to Vikhroli). It will facilitate smooth and efficient interchange with the suburban rail system and MRT system at Andheri, JVLR and Dahisar.

Apart from providing connectivity between the Central Mumbai and the Northern suburban Mumbai, the proposed metro line will provide rail based access to the Mumbai International Airport (CSIA), SEEPZ, National Park and other commercial and geographical landmarks.