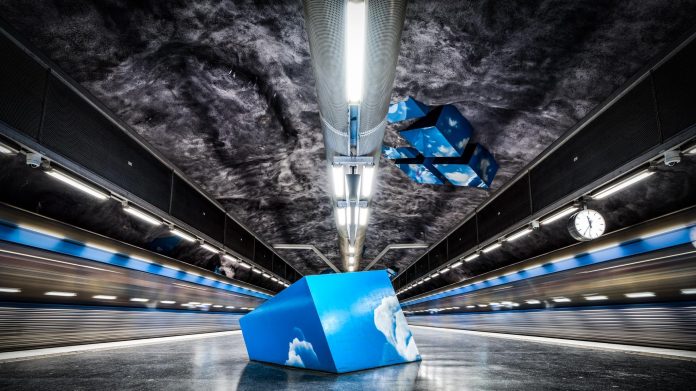 The subway system and the subway station is an environment with very high demands regarding usability, accessibility, sustainability and social inclusion. These are very strategic points in the cities which gives everyone access and connect diﬀerent parts of it.

The subway metro station could easily be a claustrophobic and stressful environment for the users, located in the underground with no sense of daylight. In a physical way the subway station has to deal with the complicated situation of bringing a lot of people from street level into to the underground and into a train. The station and subway system should also be able to work for all kinds of people inhabitants of the city as well as tourists and visitors. The users also have diﬀerent ages, cultural backgrounds, and diﬀerent kinds of disabilities. The subway station is located underground in an environment that could be seen as hostile and unsafe, this creates extra high demands regarding sensory aspects. Some of the cities have done innovations with station design in the given the physical & financial constraints and are worth looking up to. Amalgamating art and aesthetics not only gives transit stations an identity and character but also makes it pleasant to ones eye and enhances user experience. One such example which has been applauded globally is Stockholm Metro.

Beneath the Swedish capital lies an intricate web of underground metro lines. With more than 100 stations in the 110 km tunnel system, sometimes referred to as “the world’s longest art gallery”, have been decorated with paintings, installations, mosaics and sculptures by 150 artists since the 1950s. Every Metro station in Stockholm has now become like a destination and beholds a different experience for the commuters & tourists. Stockholm’s subway stations make the user feel like they’re in actual caves.

Approximately 47 % of the corridor tunnel & stations are hewn onto the bedrock which comprises of old crystalline and metamorphic rocks consolidated during hundreds of millions of years. While other Scandinavian cities with metro rails have just gone with a regular box like Metro stations, Stockholm with this artistic innovation has not only cut a huge cost on providing traditional finishes to the walls but have created one of the best case on how to use the given physical situation to its best in the metro construction approach. This metro service currently handles 1.1 million passengers a day, whereas its proposed expansion will provide service for an estimated daily ridership of 170,000.

Here is the list of metro stations in the order shown on the Stockholm Metro map. At a glance, the Blue Line has the most stations to visit. The Red and Green Lines would though have some gorgeous subway art!

Here is a collection of pictures of some of the most magnificent Metro stations from Stockholm.