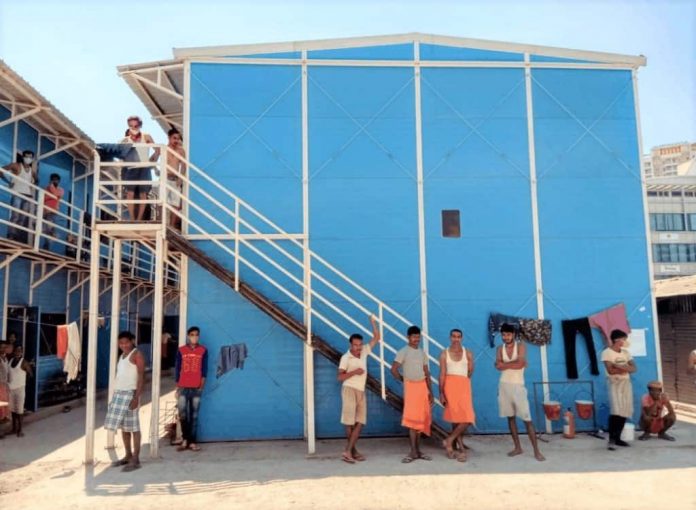 BENGALURU (Metro Rail News): On Saturday when Bengaluru construction workers in frustration, attacked an official’s car and demanding their due wages & humane living conditions. A clash exploded among the workers & police officials who visited the construction site, on Sunday.

Still, this is not clear what is the exact reason led to the clash, after speaking to 2 workers who said around thirty policemen entered the construction site. Many workers have been moved without paid for more than a month & even more.

The Bengaluru Metro construction site houses more than thousand workers in which mostly from Bihar, UP & West Bengal who are compelled to stay in inhumane situations.

A worker at the site from Jharkhand responded that the police had come to the construction site after the company opposed to the police. This happened when we had asked the company staff who stayed beside us about why water was not being given.

An argument broke out & the police began hitting and intimidating us when the police arrived. Some senior staff came & requested us not to leave & promised us that they would give us ration.

Another migrant worker from West Bengal said that after the clash stopped senior police officials & senior people from the company came and assured us that we would be taken care of and us who want to return would be sent back home in a week.

Bengaluru-based media & arts collective Maraa, who are helping & documenting the situation of all the workers responded that yesterday also violence had broken out. The migrant workers are very disappointed as there is no ration and water.

They are forced to wait for inside and they are not receiving any answer from their contractors. She further added, “All this while we have been trying to help them and be in touch with the Labour Department.

The BMRCL has not been responsive. Yesterday the majority of them determined that they do not want to work anymore with the company. And above all this, people who can leave had to give Rs 1050 as ticket fare. Many workers do not have even money.”

On Twitter, a video shared by Maraa, one of the workers can be caught saying, “The ration shop near the site has been shut for a while. There has been regularly a problem with drinking water. There is a water filter that gives very less water. How can thousands of labourers manage to drink water?”

Managing Director of BMRCL Ajay Seth is still to assure the workers their unpaid wages. Despite so many attempts, Ajay Seth can not be able to reach for comment.