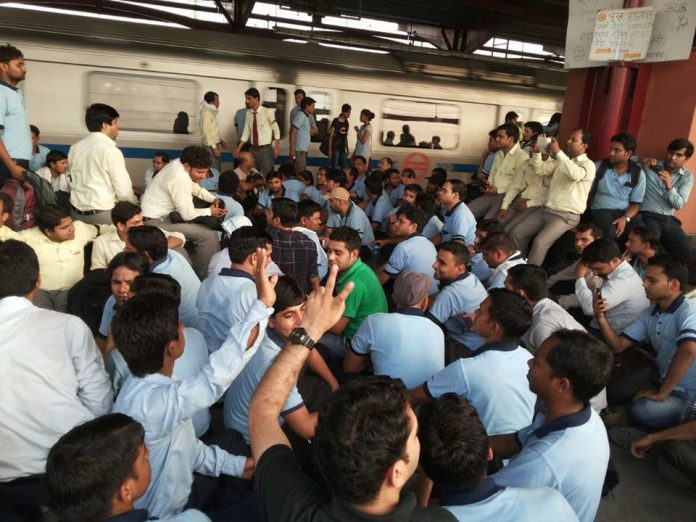 New Delhi: After July 2017 strike, the non-executive staff of Delhi Metro Rail Corporation (DMRC) have again threatened to go on a strike from Monday. The staff members have warned of a “complete shutdown” if their demands on pay anomaly, reinstatement of terminated staff, recognition of employees union  and other pending issues are resolved.

Talking about the impact of protests on train operations, Mahavir Prasad, the General Secretary of the Delhi Metro Rail Corporation Employees Union (DMRCEU) through a press release said that the protesting staffs will start wearing black ribbons on their left arm from Monday. If their demands are not met  then they will gather with mass at Metro Bhawan (Delhi Metro Headquarters) and announce complete shutdown and chakkajam at all inter-changing metro stations.

He further said that the Delhi Metro Rail Corporation Management not fulfilled any of their previous demands for assurance given to employees in series of high level meetings with Urban Development Ministry Secretary Shri D.S. Mishra, Principal Secretary GNCTD Shri M.M. Kutty and DMRC Chief Dr. Mangu Singh. RTI Supervisor Shri Vinod Shah not yet reinstated by DMRC and his appeal on removal from service has been dismissed by the Appellate Authority without taking into consideration of DMRC Chief’s assurance given to employees and the media on 23rd July 2017.

The following are demands submitted by the DMRC Employees Union to MD/DMRC, Urban Development Ministry, Delhi Government and other ministries and departments-