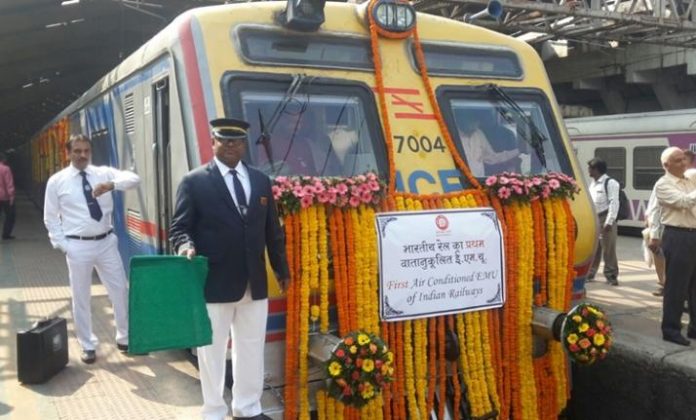 Mumbai: As the train adorned with flowers moved slowly towards Platform Number 9 at the Borivali station in Mumbai, on Christmas morning, a standing ovation was raised. Hundreds of people showed up to witness the event: 164 years after the first train of the city and India was inaugurated, the Bombay railway system launched its first air conditioning service at 10.32 a.m. of Monday. In a city of vanished residents, the debut race of the air-conditioned train triggered an unusual enthusiasm. Dozens of people climbed into the cold confines of the compartments showing broad smiles and clicking on selfies. They inspected the automatic doors, touched the thick glass windows, and marveled at the fact that passengers could walk from one compartment to another through the lobbies between the wagons, as on long-distance trains. It is clear that the 7.5 million travelers in this city of 20 million traveling on the local train every weekday could do so with a break. At rush hour, 4,500 mumbaikars are trapped in trains designed to carry 1,700 passengers. This means that an average of 15 passengers are packed into each square meter of space. For passengers who are in this “super-dense load,” as the authorities call it, ventilation is limited, and is especially uncomfortable during sweaty summers.

It’s not just the congested compartments. The train stations too. On September 29, a stampede on a narrow pedestrian bridge at Elphinstone Road station claimed 23 lives and left 39 people injured.

As a result of these conditions, many affluent residents of Mumbai have stopped traveling on trains and take them to the highway. This has given them a little more comfort, but not much more speed. The city now has an estimated 3 million vehicles on its 2,000 km of roads, a growth of 50% in the last five years. With 1,500 vehicles packed in every km of road, the city often seems like a continuous traffic jam. At the peak moment, traffic is dragged at only 20 kmph.

Rail authorities expect the combination of speed and comfort at a fraction of the cost of a road trip to convince travelers to travel on new air-conditioned trains. While car drivers take approximately two hours to travel from the northern suburb of Borivali to the Churchgate shopping district in the south, the trip by a fast train that makes limited stops takes only 50 minutes.

That, some of the travelers agreed in the inaugural race on Monday, was a big part of the appeal. “There’s a lot of room for legs, the air conditioning is good and the time it takes Borvali to Churchgate is less than an hour for a rate of Rs 165,” said Bhandari, the accountant. He said that the same trip in an air-conditioned taxi would cost 500 rupees and would take much longer.

As of January 1, Western Railways will execute 12 CA services each work day. Services will not run on weekends, to give time for maintenance.

This, the travelers predicted, will be a winner in a city where time is money. “In Mumbai, people have no ego,” Bhandari explained. “Even a crorepati will travel by train because it takes less time, people do not get upset if it’s a Mercedes, a BMW or a train, they want to get to fast places and want to get to work fast and do not want to waste time.”

Anita Kohli, an agent of the Railway Protection Force assigned to the train, was confident that the service would be successful. “Not everyone can pay for the ticket, but sometimes if the middle class wants to travel, they can,” he said. “That way there will be fewer people on the train.”

The pricing, concurrent, is what will determine the frequency with which they use the service. “I travel from Central Mumbai to Western Mumbai every day,” said mechanic Sameer Kumar. “It can be a bit expensive for us.” This train might not be for me. ”

Datta Patankar, a middle-aged businessman, agreed with Kumar. “The train is very nice, but it’s for the rich and not for the middle class,” Patankar said. “This train should be available to everyone, it is difficult to travel every day, but I will try Take the train from time to time with the family. ”

Financial analyst Nirav Khala also criticized prices. He drew comparisons between fares in the Mumbai subway and the air-conditioned train. “The subway from Versova to Ghatkopar is 11.5 km and the fare is 40 rupees,” Khala said. “But the subway was built by a private and public association.The local AC, on the other hand, is completely administered by the government.For 10 km, the fare of the ticket is Rs 65 plus. be cheaper than the subway. ”

He noted: “Mass transportation is meant to be in such a way that many people can use it, I will not travel on the train with these prices.”

The football coach Maruthi Chauhan echoed this opinion. “We should have trains of this standard for the working class,” he said. “Modiji wanders out of the country and tries to bring ideas to Mumbai, we must be able to solve something and provide services to everyone.”