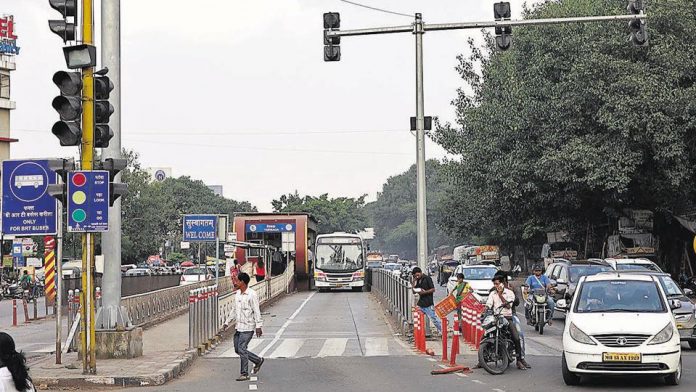 Pune: From Corridor 1 of 16.59 km from Pune Metro from Pimpri to Swargate, which is an elevated section, at least for 10 km, up to Shivajinagar, is looking at the “stiff competition” of the BRTS buses operated by the Pune Mahanagar Parivahan Mahamandal Ltd ( PMPML) and local trains operated by the Pune division of Central Railways.

One does not have to look far to find the reason. From Pimpri to Shivajinagar, the direction and destination of the three transportation services will be the same, on the Pune-Mumbai highway or along it. The three: the Pune Metro, BRTS buses and local trains, will be rubbing shoulders with each other as they head from Pimpri to Shivajinagar or back. Of the three, Metro and BRTS will be very close to each other.

The Pune metro will take at least three years to be marked. BRTS on the stretch of the Pune-Mumbai highway is likely to run its test this week and could take off around January 26. Local trains between Pune and Lonavla have been in service for 40 years.
Travelers heading to the Shivajinagar or Pimpri area can choose between the three. And the most important obvious question in your mind would be the rate structure. While the BRTS and the railroads offer the cheapest fare, it is likely that the cost of the Metro is double or much higher than the BRTS and local train fares.

As a result, Metro is likely to find it difficult to attract enough passengers. In the past, whenever PMPML has raised fares, even in one or two rupees, there have been protests from travelers. While Pune Metro officials say that travelers will prefer the Metro train given the speed with which they will ensure they arrive at their destination in addition to the rapid frequency of metro rakes, BRTS and railways point to cheap fares that would keep passengers on board. their nests.

Noting how low the train fares are, Railway spokesman Manoj Jhanvar said that from the Pune station to Akurdi – a distance of almost 20 km – the local train fare per person was Rs 5. “And if the traveler takes a monthly pass, it would cost him Rs 100 to go back and forth, “he said.

The probable plan of a Metro is to charge 10 rupees for the first two kilometers and 50 rupees beyond. However, Pune Metro officials said they were not currently thinking about the fare structure. Brijesh Dixit, managing director of Maha Metro, which is implementing the Pune Metro project, said his plan was to integrate the three modes of transport into the Multimodal Integration Plan. “We want to guarantee the perfect integration of the three services and offer reasonable rates and services that have speed and comfort for passengers,” he said.

Dixit agreed with BRTS officials that, for long distances, from Pimpri to Swargate, Metro will remain the best option. “For short distances, where there is a bus stop every 500 meters, BRTS will be the option,” he said. The railways, however, claim that there will be little change in the preference of commuter trains by local trains.

The corridor would run parallel and compete for the number of passengers, which simply is not done … While other areas would be deficient in transportation, a corridor would be running with three transportation systems. Does it make sense to feed one and starve several? “Said Prashant Inamdar, convener of Pedestrians First.

Citing protests against the fare structure in Delhi, Hyderabad and Mumbai, Inamdar said: “The fare structure has become a big problem with Metro services in the three cities, and has even affected metro users in Delhi and Hyderabad. In Mumbai, passengers have also gone to court, “he said.

Inamdar said that Metro was an expensive service. He said: “It is observed that, initially, they run the service at low rates and then, within a year, they resort to the rate increase.” In a city like Pune, where the rate hikes cause a big protest, Metro could face the same destiny “.

The activists also criticized the so-called integration of three transport systems. “How can there be integration of the three systems when they would run in parallel? They can integrate the station, but they can not integrate all the three will be involved in a competition of sorts to win ridership.