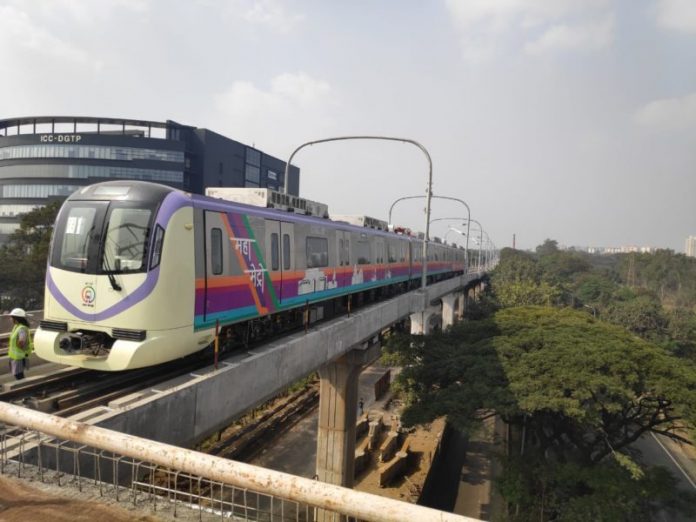 PUNE (Metro Rail News): On Thursday, Maha Metro announces that around 50% of the work on the Metro bridge, coming up on the Mutha riverbed along the Deccan Gymkhana-Balgandharva Rangmandir-Pune Municipal Corporation stretch, has been completed said Maha Metro Officials.

This portion is part of the fully elevated second line of the Pune Metro rail project, connecting Vanaz on Paud Road to Ramwadi. Maha Metro said it aims to complete the other half of the work finish before the onset of the monsoon.

According to official conversation they said that they have hastened work near the rivers, as these sites would be among the first to get affected when monsoon arrives. Two launching girders have been installed near Deccan Gymkhana to fix the viaduct segments, while the entire viaduct stretch that crosses the Mula-Mutha — connecting Bund Garden and Yerawada — was completed recently.

“We have pressed additional manpower and machinery to achieve this objective,” Hemant Sonawane, MahaMetro’s general manager (public relations) told that MahaMetro  had initially planned to complete the riverside work in the Deccan Gymkhana area by June.

An official said it was now difficult to meet that deadline, and that they were giving it a shot. “Ideally, it will be good if the launching of segments is finished before the monsoon,” said Maha Metro Officials.

MahaMetro has also initiated the construction of two stations — Deccan Gymkhana and Sambhaji Garden — on the stretch. The work on the stations is expected to continue after the monsoon, Said Maha Metro Officials.

The PMRDA (Pune Metropolitan Region Development Authority) — developing the third line of the Metro from Hinjewadi to Shivajinagar has 95% of the land and could start work in a month.