The Vande Bharat Express is India’s first semi-high-speed train. It connects New Delhi to Varanasi, a city located around 760 kilometres from the capital. The voyage of the Vande Bharat Express, which began in February 2019, is not only about creating India’s first world-class, semi-high-speed intercity train – entirely planned, developed, and produced in India. Additionally, it signals the beginning of the process of modernising the railroad’s historical signalling system by transitioning to locally designed, digital Automatic Train Protection (ATP) and Train Collision Avoidance systems (TCAS). In the long run, the concept involves the introduction of entirely digital railway operations and passenger services based on mobile broadband.

As is the case with many European nations, India is pursuing 3GPP Long Term Evolution (LTE) and New Radio as a future-proof foundation technology for railway applications. Additionally, this would enable Indian Railways to implement a large number of the features planned for the Future Railway Mobile Communications System (FRMCS), the worldwide standard for railway communications and a critical facilitator of global railway digitization.

FRMCS is the International Union of Railways’ (UIR) future global telecommunications system, developed in collaboration with the rail sector’s many stakeholders.

To begin, let us examine how 3GPP technologies aid in the adoption of FRMCS features

TCAS analyses location and sensory data in order to identify potentially harmful circumstances caused by human mistake or equipment malfunction. Without TCAS, trains are unable to run safely at speeds more than 160kph due to the driver’s inability to react quickly enough to line side signals. TCAS enables the Vanda Bharat Express to travel more quickly and safely.

ATP and TCAS, like the Vanda Bharat Express, are created and produced domestically, in this instance by Indian research groups and suppliers, and work similarly to the European Train Control System (ETCS). While they perform similarly, the Indian design is less expensive for Indian Railways.

Digitization of the railway

TCAS is completely integrated into the railway signalling system, relying on communication between trains and a regional, central control system. TCAS incorporates trackside equipment, sensors, Internet of Things (IoT) devices, and locomotive-based control equipment. All line side information, such as ‘track work ahead’ or ‘stopped train ahead,’ is electronically transmitted to the locomotive, eliminating the need for the driver to monitor these signals.

Additionally, staff employees have access to connectivity on the train, service support, onboard monitoring for passenger safety, and high-quality mobile broadband and voice services.

FRMCS architecture and services can be deployed later in India, while retaining ATP and TCAS as railway applications connected via the FRMCS network.

The incorporation of 3GPP technology into TCAS will increase line capacity and enable TCAS to grow into a network management system capable of managing the railway network from central locations spanning vast sections of track. 3GPP LTE and New Radio for railway signalling applications, including ATP and TCAS

In later versions of the standard, LTE provides ultra-reliable, low-latency communication that is appropriate for supporting ATP and TCAS and providing passenger connectivity. 5G-NR offers enhanced performance and network topology flexibility, which will enable more sophisticated use cases in the long run. Due to the widespread deployment of LTE and 5G-NR in combination with public mobile networks and the evolution of the smartphone market from LTE to 5G, mixed deployments and gradual migrations are already highly efficient.

FRMCS and 3GPP LTE and 5G-NR are a great fit, since FRMCS maintains all railway-specific functionality at the application layer, while LTE and subsequently 5G-NR can act as the high-bit-rate, ultra-reliable, and low-latency transport bearer. This design is future-proof, since new applications can be added incrementally, while the physical layer can be moved and improved to take use of the latest 3GPP release capabilities.
buy Tadalafil generic buywithoutprescriptiononlinerx.net over the counter

This layered design also takes use of network slicing, allowing public mobile network service providers and/or public safety organisations to share portions of the train signalling system. Additionally, FRMCS over 5G-NR can be introduced smoothly in both lower and higher frequency bands, as NR is frequency band-agnostic, including micro- and millimeter-wave bands, and is designed with flexibility in mind, including physical layer numerology, advanced antenna system support, and deployment options.

For ATP and TCAS, the railway need 5MHz of spectrum in the prime 700MHz band. India’s Department of Telecommunications is nearing completion of the allocation of the needed 5 MHz premium spectrum. Once spectrum is acquired, ATP and TCAS can be operational and provide safety functions comparable to ETCS in Europe.

For passenger comfort and mobile broadband services, FRMCS over 5G is being used.

Apart from rail signalling, FRMCS provides a variety of useful applications for train operators and passengers. Notably, using 5G as a solution for onboard video surveillance for passenger safety, railway health monitoring, and freight tracking. These applications place significant demands on the physical layer’s capabilities and the end-to-end service quality in terms of bit rate, latency, and dependability. LTE and 5G-ability NR’s to meet these standards is their strength.

As mobile network providers build dense 5G networks along railway corridors to service their passengers, they may also use this connectivity to provide the essential connectivity required by FRMCS. FRMCS features like as video surveillance demand a massive amount of bandwidth that cannot be given by a specialised railway FRMCS spectrum. In this case, network slicing ensures the separation of passenger services from essential train operating services and enables the mobile network service provider to augment capacity as required by the FRMCS feature.

LTE and 5G-NR are quite similar in terms of how communication services are utilised and how those services interact with the network for setup and provisioning purposes. When moving a service from LTE to 5G, only modest changes are required. Both the LTE and 5G core networks are generally installed as virtualized network services on general purpose hardware, which enables the reuse of the same hardware and flexible resource allocation for both technologies.

Additionally, dual-core methods exist in which all 4G and 5G core network operations are merged into a single core network deployment, enabling a seamless transition from 4G to 5G, as depicted in Figure 1 and discussed further in this article on 5G core.

Finally, the same radio hardware may be utilised for both 5G-NR and LTE radio access networks, with the radio access network dynamically switching between the two access types with millisecond granularity in response to user demand. This technique, dubbed dynamic spectrum sharing, permits the coexistence of 4G and 5G technologies in the same spectrum while avoiding complex spectrum re-farming strategies. As a result, for rail and mobile network service providers, deploying 4G to enable FRMCS and Gbit train services is a viable option, as it enables a seamless transition to 5G as the market for more advanced FRMCS services matures.

By 2025, 50% of Indian rail tracks will be equipped with an LTE-based High-Speed Communications Network capable of providing TCAS, ATP voice, and IoT-based telemetry services. This will enable Indian trains to reach speeds of up to 200 kph with the addition of appropriate high-speed rail alignments. A complete guide to becoming an RDSO Vendor 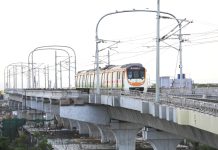 New transport options for City of Oranges and Covai