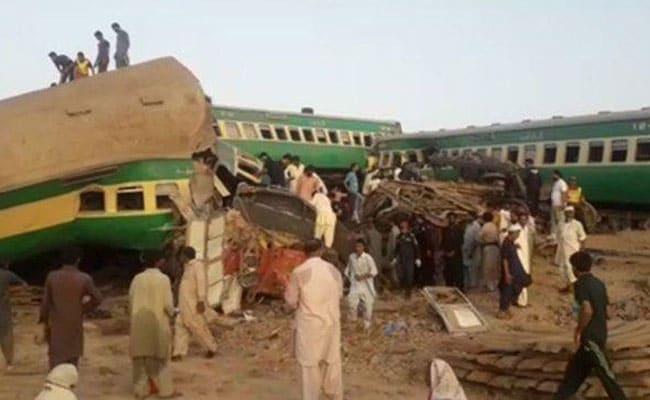 According to Dawn news, the Sir Syed Express, which was travelling from Lahore to Karachi, collided with the Millat Express after it derailed on its route to Sargodha from Karachi.

According to the report, the severe disaster occurred at Dharki, a city in the Ghotki region of upper Sindh, when the bogies of the Millat Express train toppled.

Hospitals in Ghotki, Dharki, Obaro, and Mirpur Mathelo have declared an emergency.

According to Ghotki Deputy Commissioner Usman Abdullah, at least 30 persons were murdered and 50 were injured in the event.

Officials were also having problems retrieving persons who had become trapped within the crowded bogies.

Several passengers were stuck in the crumpled debris caused by the crash at Daharki, in a remote section of rural Sindh province, for hours before rescue teams with specialized equipment could reach them.

According to police, at least 43 people were murdered and many were injured when a crowded Pakistani intercity train collided with another express that had crashed just minutes before.

Several passengers were stuck in the crumpled debris caused by the crash at Daharki, in a remote section of rural Sindh province, for hours before rescue teams with specialised equipment could reach them.

Huge crowds gathered from adjacent villages surrounding the wreckage of the upturned Pakistan Railways trains, with twisted and torn metal and heaps of baggage spilled over the ground.

The double collision occurred approximately 3.30 a.m. (2230 GMT), when the majority of the 1,200 people on the two trains would have been sleeping.

“We collided, but it wasn’t too fatal,” Akhtar Rajput, a passenger aboard the wrecked train, told AFP.

“Then another train came out of nowhere and slammed us much worse. When I recovered consciousness, I noticed folks laying about me, some of whom were attempting to exit the vehicle.”

“When the other train hit, I was dazed and trying to figure out what happened to us,” Shahid, another passenger, told AFP.

The Millat Express was travelling from Karachi to Lala Musa when it derailed, leaving its carriages scattered over the rails as the Sir Syed Express from Rawalpindi arrived minutes later, slamming into it.

According to authorities, the majority of the dead were recovered from the wrecked train.

According to Umar Tufail, a senior Daharki police official, 43 people were murdered and many were injured.

According to a representative for Pakistan Railways, the death toll is 33, although communication with the disaster scene was difficult due to its remote location.

To acquire a phone connection, one rescue worker said he had to stand on top of his car.

Farmers and peasants from the surrounding area were among the first to help passengers in attempting to extract survivors from the crumpled carriages by reaching through smashed windows and roof hatches.
buy amoxil online https://www.parkviewortho.com/wp-content/languages/new/prescription/amoxil.html no prescription

The collision took place on a high part of road surrounded by beautiful countryside.

The track where the disaster happened, according to Interior Minister Sheikh Rashid, a former railroads minister, was erected in the 1880s and is “a shambles.”

Azam Swati, the current minister, called the section of railway as “very unsafe,” but claimed officials had been waiting for financing from the multibillion-dollar Economic Corridor project to improve the network.

“If there is a financial delay,” he stated, “we will reconstruct this track with our own money.”

Pakistan’s army and paramilitary rangers from adjacent bases were on hand to assist.

Communication issues, according to Gul Mohammad, who works for the Edhi Foundation ambulance service, are preventing the rescue attempts from being coordinated.

“I’m talking to you from the rooftop of my ambulance, where I’m getting a stronger connection,” he told AFP.

Train accidents are widespread in Pakistan, where the railway network has suffered for decades as a result of corruption, incompetence, and a lack of investment.

Railways Revenue Earnings up by 76% in Passenger Segment