New Delhi: Finally Faridabad Police lodged an FIR (First Information Report) on today against two senior metro officers against a complaint of negligence in case of death of a metro employee due to electrocution. 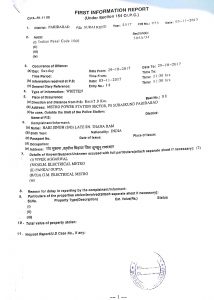 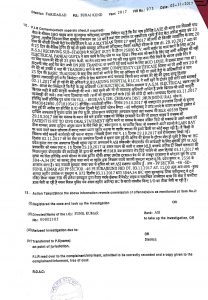 Anish Choudhary, 24-year-old Delhi Metro employee was electrocuted at a RSS (Receiving Sub-Station) in Faridabad while carrying out some repair work on 25KV insulators. The accident occurred when someone switched on the equipment without warning. Anish Chaudhary suffered severe burn injuries and died in hospital. The incident took place on intervening night of 28/29th October 2017 when Chaudhary , stationed as an on job trainee (OJT) at a sub-station near Neelam Chowk in Faridabad.

Witnesses said Chaudhary had checked whether the connection to the unit had been switched off before climbing on a pedestal to repair it. However, someone apparently switched on the power accidentally, and the shock was of such magnitude that Chaudhary remained stuck to the frame for some time. Hearing his cry for help, someone switched off the supply and managed to pull him down. Chaudhary had lost consciousness by then.

He was rushed to Appolo Hospital, Sarita Vihar New Delhi, which referred him to Safdarjung Hospital where he died during treatment on 2nd November 2017. A Delhi Metro employee, Ravi Kumar, said access to the unit where he was working was restricted to seniors. There is a major lapse on the part of the management in allowing an on-the-job trainee to reach the point and carry out repair work.

His family members have alleged foul play . They were preparing for his marriage after he landed a job with the Delhi Metro. “His mother is unaware of the loss and believes that I have to take him home for the wedding. It will be tough facing her with the body,” said Hari Singh, Chaudhary’s father. The Delhi Metro Rail Corporation Employees Union (DMRCEU) organised agitation overnight of 3rd November 2017 against loss of a metro employee due to negligence, cruelty and gross violation of safety rules by Delhi Metro Rail Corporation and demanding immediate action against the all culprits, huge compensation to deceased’s family member, job to one member of his family and adopt standard procedures to prevent similar accident in future. A series of meetings also conducted between staff representative and the DMRC Management and ended with no positive outcome.

A senior DMRC official said, “A detailed investigation by an electrical inspector general nominated by the government is under way to establish the sequence of events leading to the unfortunate loss of a young life.” DMRC managing director Mangu Singh also ordered a review of the procedures at sub-stations. DMRCEU (Employees Union) representatives are not agreed with the decision of the metro management as there is lot of chances to manipulate inquiry proceedings and manage inquiry report in organisation’s favour.