Our Managing Editor, Mr. Narendra Shah interacted with Mr. Sanjeev Sachdev, the Managing Director at Toshi Automatic Systems Pvt Ltd. He discussed the key issues related to going fully digital in the faring system of Metro Networks and other public transport systems. Mr Sachdev shared his views and gave his opinion about the possibilities in the NCMC scheme in future. We present here the conversation:-

N.S. – How do you think the COVID is going to affect the public transport system and what are the ways to tackle the problems arising out of it?

S.S. – As COVID is affecting every Individual small as well as large businesses. Many people have lost their jobs which has created many problems including financials as well as social.

Stopping the operations of Metro is not the right solution. In fact, it should operate with enhanced safety strict protocols like social distancing as well as uses of masks and sanitizers is needed.  Sanitization of rolling stocks, stations, elevators etc. will help to avoid chances of getting an infection . A contactless ticketing and fare system including the use of metro cards, QR codes Etc. are needed in place of the existing RFID coins or paper tickets in order to avoid the spread of infection.

N.S. – What are the possible changes which we will experience once we go back to use the metros and other modes of Public transport. What do you think about it?

S.S. – As said above, public awareness is a must and protocols related to personal sanitization, sanitization of  Stations along with making available common facilities at stations is need of the time. Contactless entry and exit from stations will also help to reduce chances of the spread of infections.

N.S. – The National Common Mobility Card scheme has been one of the ambitious projects of Mr. Narendra Modi led Central Government. How can the scheme benefit in going fully digital in the urban transport system especially in the metros?

S.S. – One of the biggest advantages of NCMC scheme will be binding the public mobility across the country with a single card. A  single travel card can be used throughout all public transport systems like Metros, Regional Bus services, ferries etc. It will also minimize the need to buy local tickets or travel card for different cities making it a hassle-free affair to travel beyond the boundaries of a single city.

N.S. –  How the new system and technology will affect Platform Screen doors and how do you think they can be managed effectively and efficiently?

S.S. – PSD or platform screen door is for the safety of the passenger at Metro & BRTS stations only.

It helps in creating a safety wall in between the passenger and the track or the road in case of BRTS to avoid accidents.

Indegeniously designed PSD doors for BRTS are quite successful and are being used in more than eight BRTS projects in India since 2009 but none of the Indian companies have been given the opportunity to do so for Metro systems.

Once developed locally under Make In India, the PSD doors for Metros will help in reducing the production cost as well as it will provide 100% safety to the passengers travelling in metro trains.

N.S. – Do we need to change the existing AFC gates if we move further towards implementing the NCMC scheme in the metros across the nation?

S.S. – No,not. There is no need to change the existing AFC gate commissioned at Metro stations. A separate aisle can be created at every metro station for NCMC gate and this will help in Reducing the cost of the project along with fair trials for NCMC gates.

Gradually old AFC gates can be converted into NCMC gates in a phase wise manner.

N.S. – What will be the benefits of the scheme as far as your opinion is concerned ? Is it going to be feasible ?

S.S. – Certainly the scheme and the vision to bind the mobility sector with one common card is an ambitious long term plan and it will ease travelling in public transport across the country.

N.S. –  What are the various complications which we will have to face while implementing this? How much time will it take as per your assumptions?

S.S. – One is acceptance to the new system. Initially, there are few challenges whenever there is a transition from the older system to newer ones. In the next 3-4 years,  new aisles can be created at existing metro stations and in case of new projects, NCMC gates can be considered from the start.

N.S. – What will be the measures which you would like to suggest to the government and the agencies involved in the implementation of the project ?

S.S. – NCMC gate project needs hand holding from the central & state Govt. as well as acceptance of the same from DMRC and other metro authorities across India.

“Swagat” (NCMC fare gates) will have a very long term effect on public transport system by increasing the ridership through convenience.

N.S. – Is it going to boost the Make in India concept? Please provide with your opinions whether it is going to help in the recent campaign launched by the Central Government called Atmanirbhar Bharat ?

S.S. – Yes. It will  definitely boost the Make In India & Atmanirbhar Bharat conceps.t  It will provide immense opportunities to the Indian companies to grow their businesses in India and across the globe.

N.S. –  How do you think it will affect the public transport systems? Is it going to bring a revolutionary change in the metros across different states of our country?

S.S. – As I have already stated above, the public transport systems accepting the scheme will help to bring the whole transport system faring system under one umbrella which will surely help to become fully digital in fare collection. It will also help to decrease the chances of getting infections as it will decrease the chances of getting physical contacts.

N.S. –  It has already been more than one year of the launch of the NCMC Scheme but no adequate works have been done on the ground. What do you think about future possibilities in such a scenario?

S.S. – Yes, delay is certainly there but the future of NCMC scheme is very bright.

We hope that the implementation of NCMC gates starts very soon in various Metro projects across the nation. The move will create new opportunities for Indian business in this field.

N.S.-  The card is enabled with the indigenous Rupay payments system. How will it help to strengthen Rupay and NPCI if the scheme is fully implemented?

S.S. – The basic idea is to ease the way of ticketing and travelling on a public transport system so multiple  modes like Rupay QR NPCI etc acceptance is preferred. It will also help to increase the revenue generation for Rupay which will further help NCPI to make Rupay a global payment system.

N.S. –  Please share about your firm’s contribution towards Make in India and Atmanirbhar Bharat movements.

S.S. – Under Make In India and Atmanirbhar Bharat we at Toshi Automatic Systems P Ltd(TASPL) have started developing a lot of products. We were earlier importing them from European and different Asian countries.

In Ahmedabad BRTS, we have supplied commissioned 550 AFC gates and 271 P gates along with PSD doors at 150 bus stations.

At Terminal 3 of IGI Airport,  automatic gates at immigration and visa on arrival have been supplied and installed by Taspl in 2016 & 2018.

We have also Worked with BEL & C-DAC to develop NCMC gates for them in 2018-19 and supplied few gates for trials. One set of the  gates was inaugurated by Hon. PM sir in 2019 at inauguration ceremony of  Ahmedabad metro.

Currently we are working on PSD door for metro application under Make In India and Atmanirbhar Bharat schemes.

N.S. – How can your firm work to help the government and metro corporations ? Kindly elaborate.

S.S. –  I would like to say that if the Government and Metro corporations help us and do the hand holding, We hope to serve them by developing AFC, NCMC & PSD Doors which can also save their substantial capex cost and O&M cost in the long run.

It’s a long way to go but without support from Govt and Metro Authorities we will not be able to deliver.

N.S. – I thank You for sharing your views and giving your precious time. 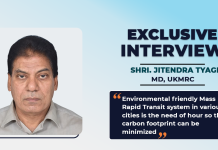 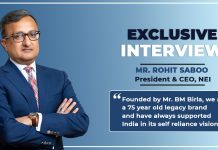