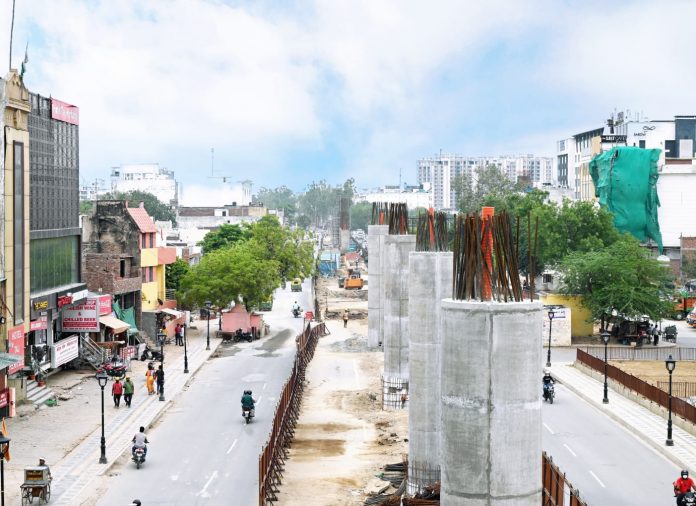 AGRA (Metro Rail News): Despite all the challenges, including the Covid-19 second wave, work is progressing at rapid pace for the Agra Metro as in less than eight months, work on 100 pile capes, 62 piers (pillars) and 550 piles have been completed so far for the elevated section of the Priority Corridor between Taj East Gate to Fatehabad Road by the Uttar Pradesh Metro Rail Corporation Limited (UPMRCL).

According to the Managing Director of UPMRCL, Kumar Keshav, the construction of the station complexes along with the viaduct for the Priority corridor is being carried out at rapid pace with the two stations of the elevated part i.e. Taj East Gate and Basai stations have started taking shape, horizontal beams are being constructed for these two stations. The piling work has also been completed from Taj East Gate to Fatehabad Road.

A total of 687 piles, 171 pile caps and 171 piers are to be constructed for the elevated portion of the Priority Corridor being built between Taj East Gate to Jama Masjid. The work of casting 17 pier caps and double T-girders has also been completed so far in the casting yard.

The Priority Corridor of Agra Metro comprises construction of 6 km long section from Taj East Gate to Jama Masjid with six stations. Contract is awarded to Sam India Built Well Pvt. Ltd. for the elevated portion of length 3 km with 3 stations namely – Fatehabad Road, Basai & Taj East Gate. However, tender is still pending for the underground section of length of 3 km that will run from Jama Masjid to Taj Mahal with three underground stations.

Uttar Pradesh Metro Rail Corporation (UPMRC) has set a deadline of March 2024 to start operation of metro trains on the Priority Corridor.