KANPUR, INDIA (Metro Rail News): The metro track of the 9 KMs long priority corridor has been completed. The Corridor is between IIT to Mothijheel.  Under the 9 KMs stretch Priority Corridor of Kanpur Metro Rail Project, the very last U-Girder of the section was near Motijheel station last night. With this, the viaduct of Metro Track from IIT to Motijheel is also entirely completed. A total of 624 U-Girders are placed throughout the Corridor. The erection work of U-Girders was started on 11th August 2020, and 624th, which is the last U-Girder of the section, was laid on 01st October 2021. Director (Works & Infrastructure), UPMRC officials, and other senior officials were also present at the site.

The last twin-U girder on the Priority Corridor of Kanpur Metro project was erected at midnight yesterday. Thus, with this entire about 9 KMs viaduct on Corridor from IIT to Motijheel completed. When we look back, it is a Herculean task that has been completed in just 22 and a half months since commencing construction of the first pile on 15th November 2019 by the Honorable Chief Minister near IIT Kanpur. Great work with high precision and monitoring; keep it up, team! It is possibly the fastest construction of any Metro project. May God continue showering his blessings on us, said Shri Kumar Keshav, MD, UPMRC.

The UP Metro team is working round the clock to move towards the proposed target of starting a trial run on the 9 KMs long Priority Corridor in November 2021. The officials said that the Track Laying and Signaling System work started from IIT Metro Station and reached beyond Geeta Nagar Metro Station.

Uttar Pradesh Metro Rail Corporation (UPMRC) completed an elevated viaduct up to a distance of more than 8.5 KMs out of 9KMs a few days ago. The casting of U-girders in Kanpur started on 20th January 2020. The total cost of this project is approximately Rs. 111 Billion.

The stations’ names in this Corridor are IIT-Kanpur, Kalyanpur, SPM Hospital, Kanpur University, Gurudev Crossing, Geeta Nagar, Rawatpur GSVM Medical College, MotiJheel. Overall, the work has been completed up to 70-75 Per cent. The first five stations, IIT, Kalyanpur, SPM, University and Gurudev, are in their final stages. In comparison, on the other four stations finishing work is being done at a rapid pace. 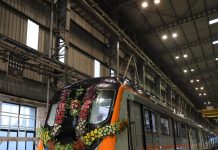 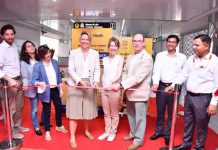